First week of back to Japanese! (seriously this time) 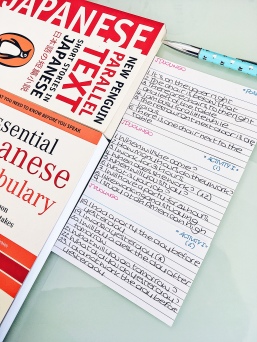 I’ve settled down to this routine of alternating weeks between Japanese and Chinese (at least for the moment, you never know), and this is my first actual week of proper Japanese study. Yay!

I don’t know how many times in these last couple of years I’ve said that I truly want to start studying Japanese again. And I did made some efforts, I can’t deny that; but effort very often is not enough.

If you have a busy life, to only way to make things happen is to actually *schedule* and allocate time to them; otherwise they become just something you do a couple of times, but never really engaged with.

After having studied Chinese intensely (especially since last August) for the sake of HSK3, I felt like I wanted to do the same for Japanese. I’ve been watching a few anime/dorama lately, and listening to spoken Japanese rekindled my never really faded passion for it.

Which means that I made a serious mental note to *really* get back to it in 2019. And here I am.

The trouble I’m having at the moment with it is that I mix up hanzi and kanji a lot. Like, a lot. I’ve practice hanzi quite intensely for HSK so now I find it confusing to go back to kanji (especially with regards to pronunciation). Since listening is always my weakest skill [for all languages], I’ve decided that for the moment I’m going to push my Japanese studies towards the direction of mainly vocabulary and listening. It’s something I’ll have to get to at some point anyway, so the sooner the better.

My plan for this week was to watch Midnight Diner: Tokyo Stories with Japanese subtitles. I’ve watched it already with English subs (it’s actually one of the significant other’s favourite TV shows 😳). For the moment I’m not pushing it too hard – I just watch it glancing at the subtitles from time to time, but I’m mostly trying to get accustomed to the sound of the language (especially on the difference between women talking and men talking). It is incredibly relaxing and I enjoy the plot even more!

This is just week 2 of my language learning experiment, but I’m liking it so far. I think it gives me enough space to focus on one language for enough time to get serious with my learning, while remaining engaged  and motivated for the other as well.